Getting to know you...

John Lawrie Group were founded in the 1930’s as a scrap metal merchant and from there they’ve grown in strength and capacity. The recent investment from Rubicon Partners drove John Lawrie to seek out a marketing partner who could deliver. We have supplied John Lawrie Group with promotional merchandise for a number of years, but we were excited to pitch our ideas for a significant body of work. The Group have developed an expertise and passion for the Circular Economy, and this messaging needed to be front and centre of everything we did.

The timeframe was tight. Offshore Europe, the biggest event in the oil and gas calendar, was just 8 weeks away. Don’t Panic.

Of course we did.

The John Lawrie Group Logo was well established. The collateral, usage, font, structure and general brand guidelines was not. Our Studio team had to pull together a new cohesive visual identity. We began by building a new collateral identity, new business cards, datasheets, brochures and folders. All had to be either redesigned, rewritten and in some cases created from scratch. In all we totalled 11 case studies, 7 datasheets, 6 business cards, 1 brochure and 1 folder.

We introduced brand elements such as the red chevron and the grayscale photography and set font guidelines and matched the Pantone/CMYK colour across the board. 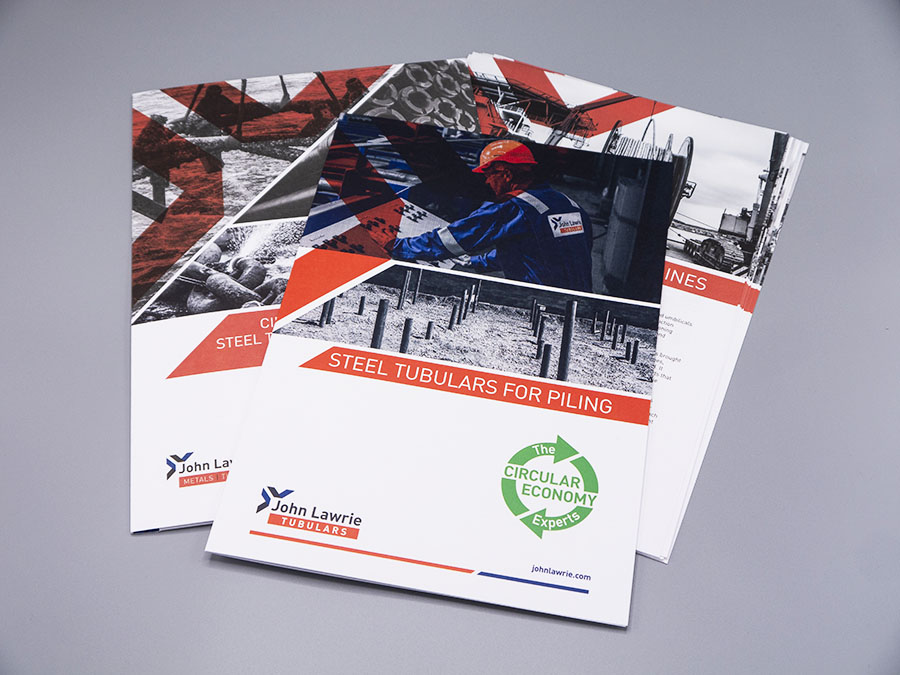 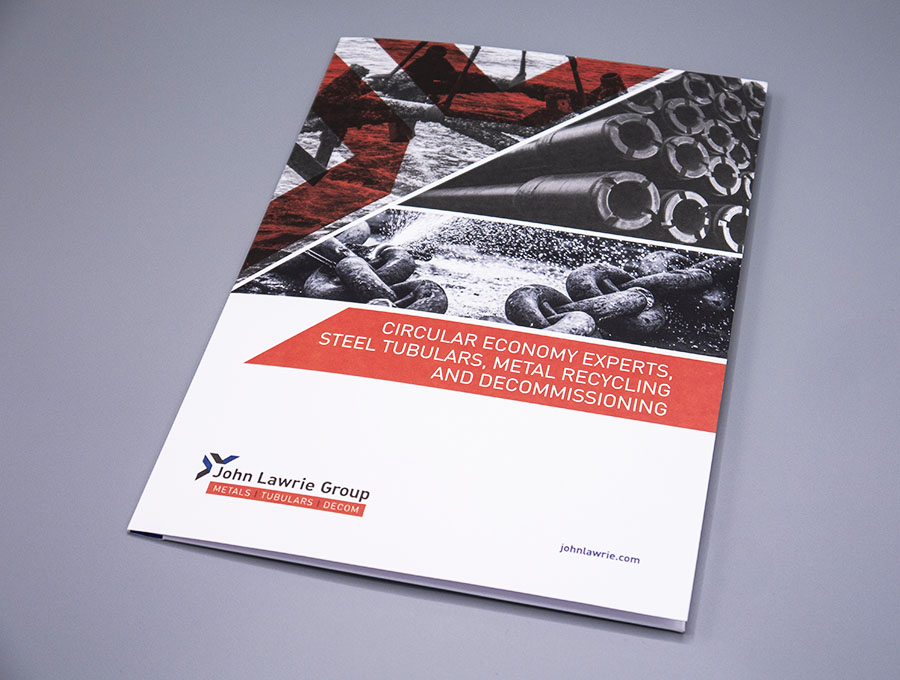 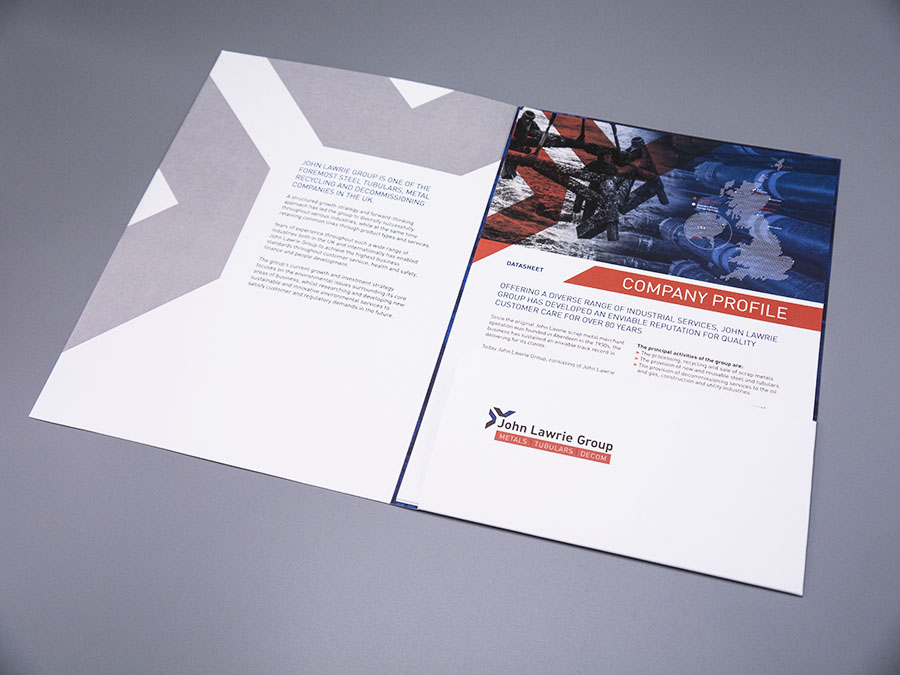 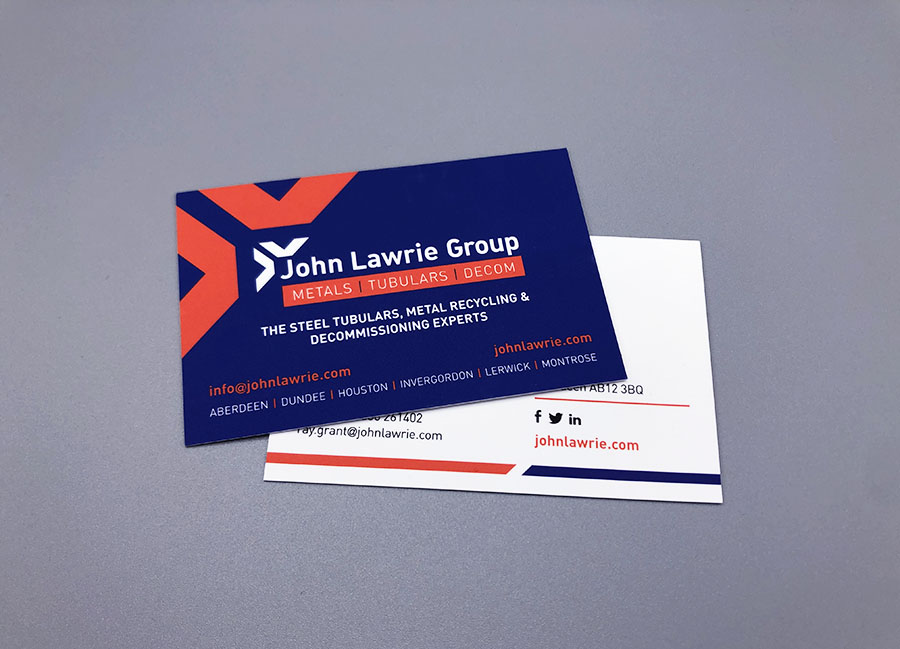 A new font was chosen to reflect the brand and to make sure all future collateral and usage was consistent. The DIN font is popular for its regular and structured design and is often used for transportation, administration and signage due to its readability and versatility. For web Poppins was used as a popular clear font with a similarity to DIN and a consistent performance across browsers.

The Offshore Europe conference is one of the most anticipated trade shows in Europe. Big players in the energy industry come together to show off their new technology while service companies vie to win the ear of the hottest contracts in town. Networking and showing off. It’s all about catching attention and delivering information. There were plenty of other vendors, we needed to do something unique.

The Events Complex Aberdeen (TECA) was a huge story for John Lawrie Group. It was their repurposed offshore tubulars that formed the very foundations of the building that was hosting the event! They needed to tell that story.

Like so many things it started as a throwaway comment during discussions but evolved into an eye-catching visual that represented everything that the John Lawrie Tubulars division was all about. Aside from the focal point animation, there was a set of real cut pipe to provide a talking point and plenty of wall space to create exciting visuals.

The John Lawrie Group brand was front and centre with each of the 3 divisions getting their share of wall space with a plinth designed specifically as a home for John Lawrie Groups 2017 VIBES Award for Circular Economy. Not bad. 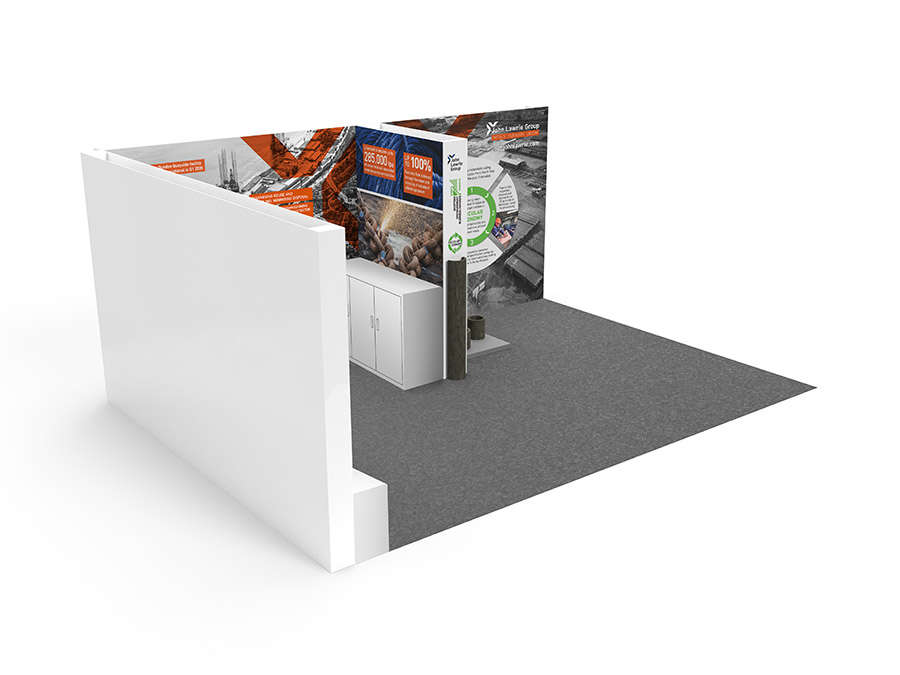 It wasn’t just the offline print work that we were able to provide. We were privileged to win the contract to completely overhaul the John Lawrie Group website…in 8 weeks. Queue the swiftest UX and UI planning we’ve every undertaken. Our web team spent a number of late nights and weekends reorganising the structure and design to make it easy for JLG clients and staff to navigate independently. The design was also overhauled to pull back on the use of the John Lawrie red and blue, to use in less overwhelming highlight situations. The inclusion of lots of high quality coloured imagery replaced the use of block colour sections. 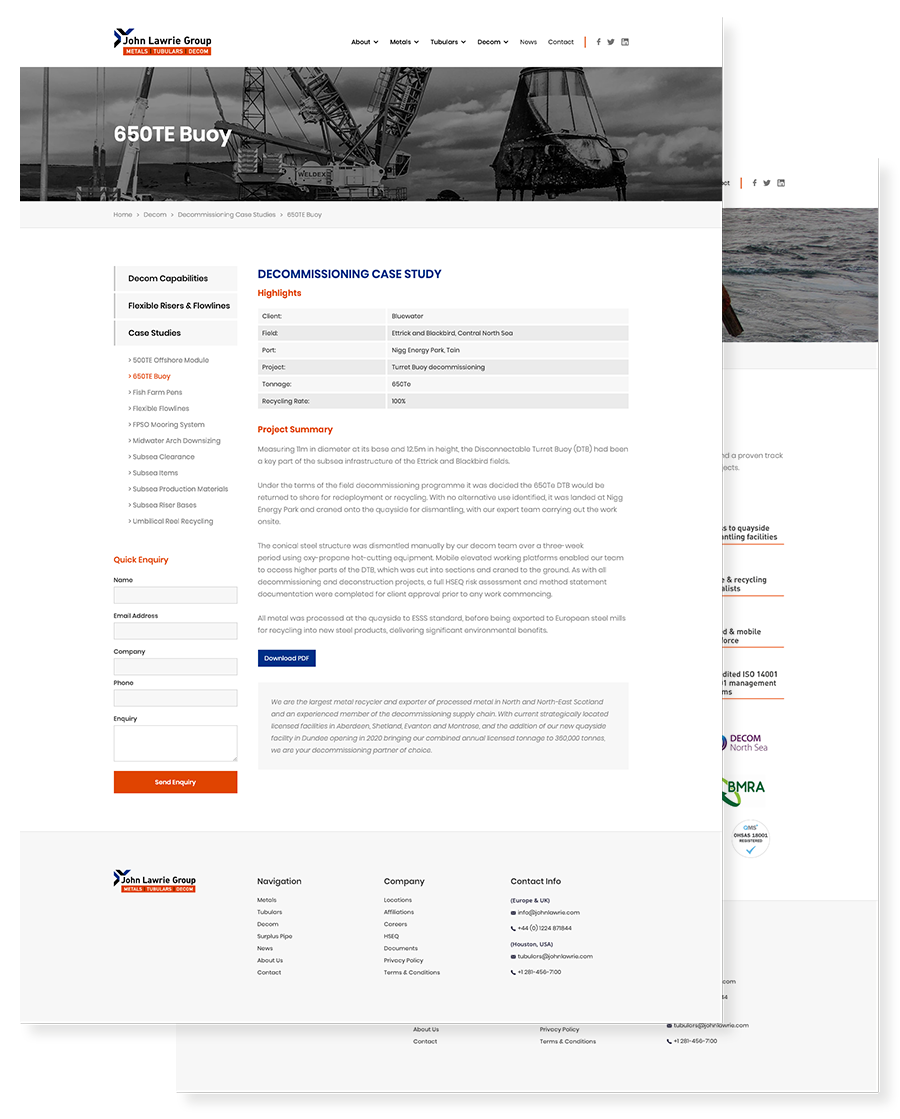 We also introduced a more proactive approach to social media. Aside from ongoing management support we drove interest to visit the OE19 stand before, during and after with a variety of content, messaging and imagery. Organically driving over 2000 engagements across their social media channels. We’ve still got lots of ideas for next time! 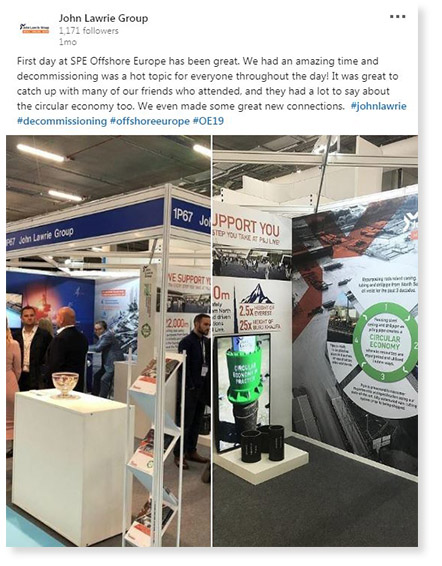 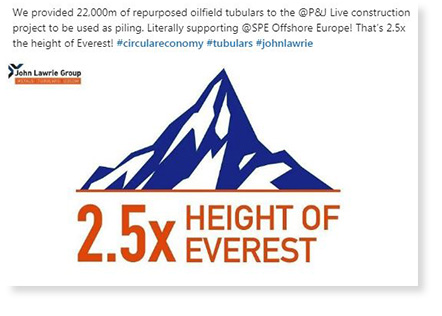 No one wanted people leaving the stand without something to remember them by. Not only was the print work available to all but a range of Minto Branding promotional goods and accessories that prove that giveaways are still as strong as ever. 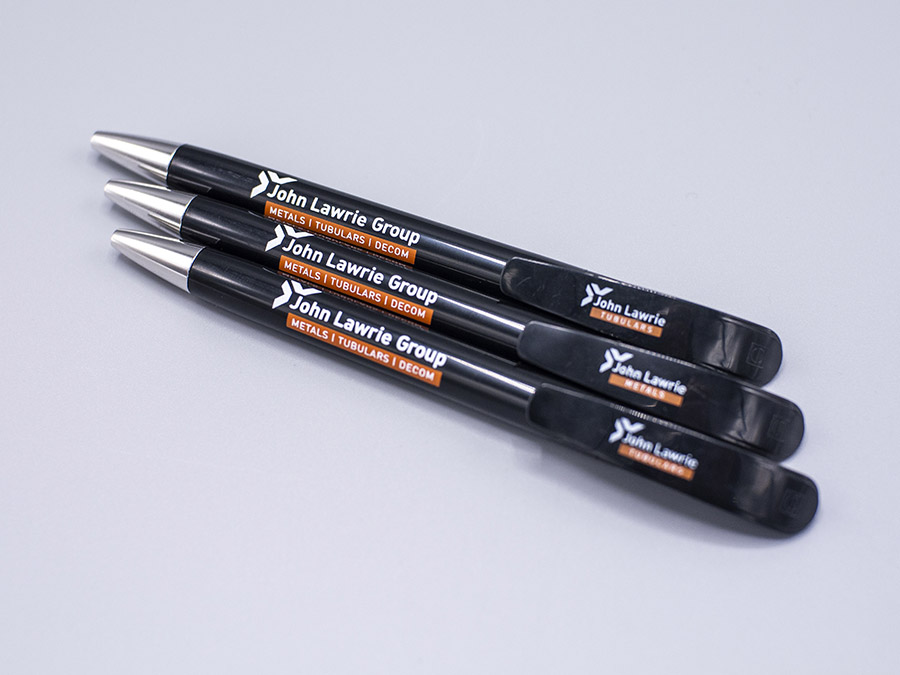 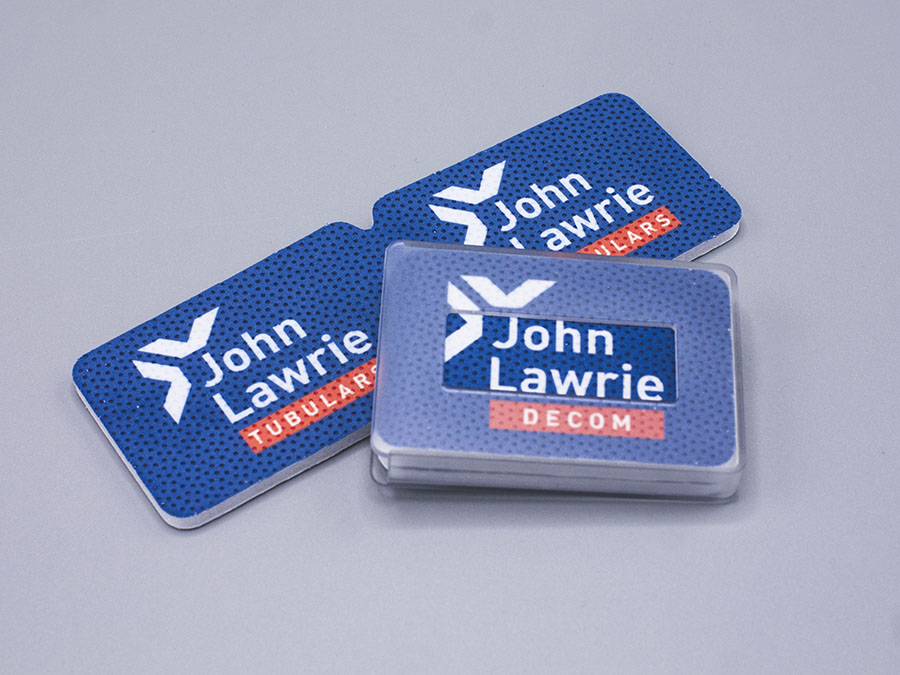 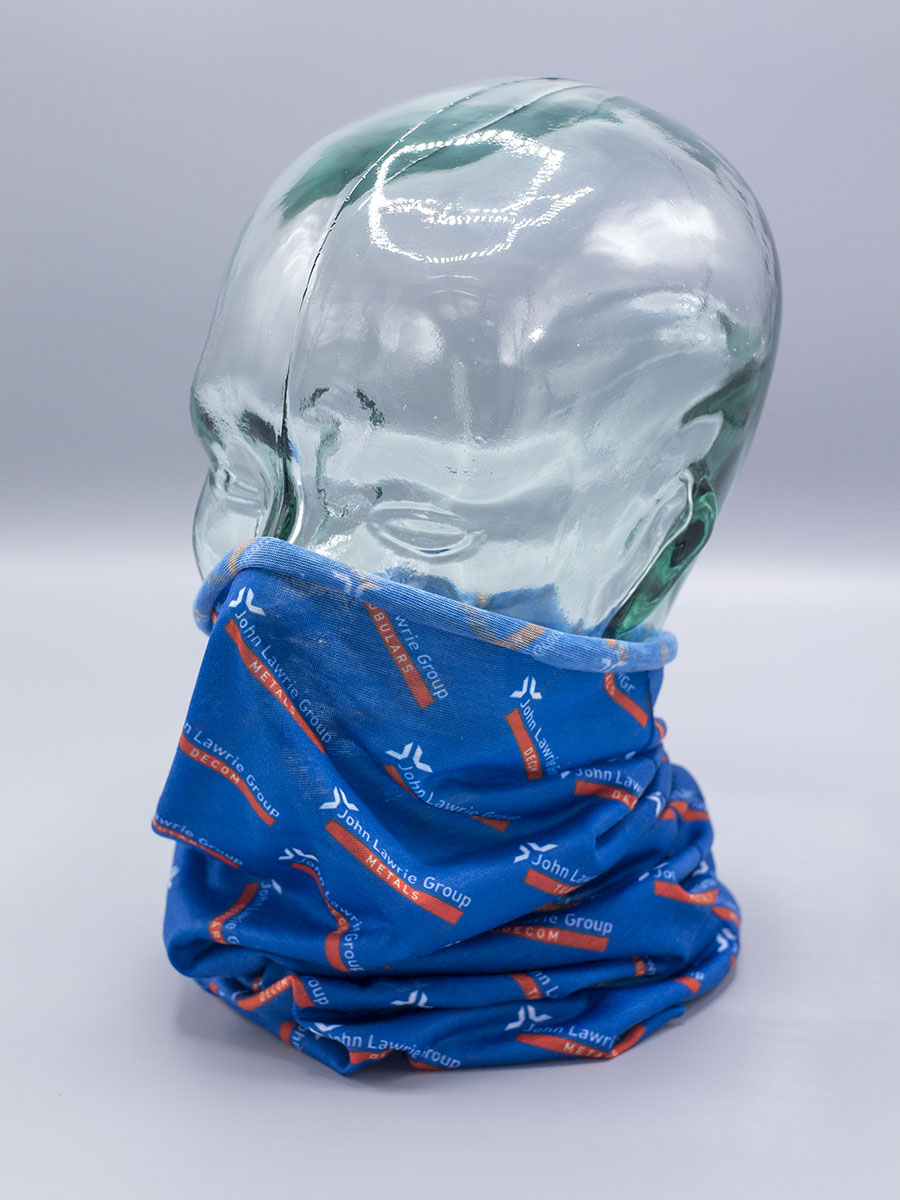